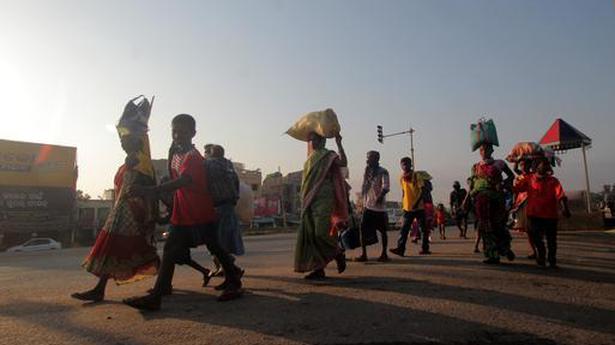 Two days ago, Arvind Mandal hailing from Jharkhand’s Godda district, purchased rations from a grocery shop in the city for the last time as he had almost completely exhausted his meagre savings.

And though he had heard that trains had resumed running between cities and that fares were being ‘waived’, he knew he could not ask his family to wait for an unknown number of days to board a train. So, on Wednesday, Mr. Mandal decided to set off on foot and walk the 700 km distance to his home.

The migrants’ caravan he was leading included 21 children, with a couple of them less than a year old.

“What can we do? If we would have to beg here to survive, the same we can do while walking back home. At least, there will be hope of reaching our home one day,” said Mr. Mandal.

Unable to find a job in Jharkhand, where the unemployment rate had shot up to 47% — more than double the national average — the 40-year-old had taken a train to Bhubaneswar in search of work.

He was not disappointed. Mr. Mandal and his wife soon got a job at a construction project near Pahala between Cuttack and Bhubaneswar. Sustenance was not a problem for the family as both of them were now earning.

But, in March, the COVID-19 pandemic started to impact the family. As the lockdown progressed, the crisis also worsened. Mr. Mandal’s family was not alone. There were 20 other couples from Jharkhand, who each had a similar tale to tell.

The preparation for the long walk began from Tuesday evening with the purchase of flattened and puffed rice. And in the small hours, the migrants’ group started their trek towards Jharkhand. Children were seen walking alongside their parents, slowing the group’s progress.

“Who does not want a stress-free journey,” asked Bhim Mandal, another daily wager even as he acknowledged that they could travel quicker had the children not been with them. “But we don’t have any idea as to who would take us to the railway station. Even if we reach the station, we don’t think we will be allowed to enter the train,” he asserted.

Dozens of groups of migrant labourers, who were working in southern India, have been walking through Odisha to reach their homes in Jharkhand, West Bengal, Uttar Pradesh and Bihar.